Member’s Contribution: Mr. Benjamin Gatt is a member of the Malta Chamber of Psychologists and a warranted Counselling Psychologist working within Mental Health Services Malta. His work is focused on Acute Mental States and also Rehabilitation and Complex Needs.

I am a male – yet even more significantly I am first and foremost a human being. Thus, when I hear about incidents of any kind of violence, like the brutal killing of Sarah Everard which happened in the UK lately, or other verbal or emotional abuse I experience a sense of shock, disgust, sadness and rage at these acts full of violence, cowardice and vileness. However, after those feelings settle down, I also wonder and ask myself: ‘What makes a person able to commit such a callous act?’. ‘Why are these acts still happening in 2021?’ As a Psychologist I observe people, question their behaviour and try to analyse it. This incident is sadly just one of thousands; if not millions, which happen every year.

A 2018 survey conducted by the NGO ‘Stop Street Harassment’, concluded ‘that 81 percent of women and 43 percent of men had experienced some form of sexual harassment during their lifetime.’ This figure means that 4 out of every 5 women has at least once in their life experienced a traumatic incident. These incidents ranged from verbal harassment, unwelcome touching and being followed in the street. The rate of sexual assault in this particular survey was 27% meaning that more than 1 in every 4 women! Talk about an epidemic! This is an epidemic of trauma which is ravaging our societies. According to the same survey, 31% of female victims felt depressed or anxious and 23% had to change their routine or regular routine. This translates into great difficulties in one’s personal quality of life.

As a male human being I am appalled that other males like me still think that they have the power to impose themselves on another person. Where are the values of respect, self-respect, dignity, compassion and kindness? Some might argue that violence against women is not a new phenomenon as it has been with us since days untold. This is however not a justifiable excuse for it still being with us today. As societies we have developed economically, technologically, politically etc. Yet, what about our morals, our respect towards each other and our equal status within society? Statistics in the aforementioned survey also show that most of the perpetrators are males. Thus, my question to fellow males is the following: ‘Can’t we do better?’ My answer is, ‘Yes we can and much better!’ ‘But how?’ one might ask. Firstly we need to understand what fuels this behaviour.

As psychologists we are trained to look for the purpose behind the behaviour. I’m afraid that behind these brutal incidents there is not one single answer but yet there could be a simple explanation. In my profession, I have always been trained to look at abuse from a lens of power meaning that the purpose behind abuse is that to gain power. There is an innate need for power in all of us, but when used wrongly it becomes abuse. We need a sense of power to compete with others for our survival firstly, but it becomes abusive when it is used unfairly for wealth, status, privileges, admiration and even fulfilling of sexual desires. So as a tool, power is needed but it depends on what one does with it that matters. After all, what creates this dynamic of competition between genders? The answer to this comes from the ‘Social Identity Theory’ which posits that people base their identity (and consequently self-esteem and pride) according to their group membership. This translates into an ‘us and them’ mentality. Males are trying to belong to their own gender equals but in the process may also have to jostle each other for power, status and recognition. In this incredibly complex internal competition, there exists however a great threat. It is called toxic masculinity.

Due to this phenomenon males have been suffering an identity crisis for centuries. Throughout history men have been socialised into having to show power and strength, hiding vulnerabilities and being dominant. Yet, these are unrealistic, irrational and even more so abusive standards. Therefore, how do some men react when vulnerable? What happens when feeling they underachieve and don’t measure up to the ‘high standards’ (albeit toxic) of the way they’ve been socialised? They cope by turning to abusive (or self-destructive) behaviour. I have always learnt in my professional training that abuse breeds more abuse and that a bully / abuser is a product of an abusive situation. Isn’t being told that you cannot cry when hurt, or show emotions such as sadness or anxiety, or that you have to keep going even if it hurts abusive? Isn’t being told that you cannot show vulnerability, or can’t dance because you’re a male abusive? Isn’t being called derogatory words because one prefers to do art instead of play football abusive? This phenomenon of toxic masculinity is so rampant that in 2018 the American Psychological Association has even issued practice guidelines into how male children should be appropriately socialised and educated.

So how does this transform into harassment? One of the effects of Toxic Masculinity is that it leads men to objectify women as prizes for possession and conquest. It dehumanizes women (thus reducing empathy towards them) and instead puts them on a pedestal to conquest and conquer. In a mentality of ‘us and them,’ the other group’s status is often ‘diminished’ in order to increase one’s own group status and feel in this case more powerful, better or more deserving. In psychology this is termed forming prejudices (i.e. judging someone based on pre-established beliefs) which in this case produces sexist or misogynistic views. For example, one would think that women are less intelligent, simply a sexually gratifying object, or seen as less capable or less deserving of power positions in society etc.

Remember when I mentioned that at the base of abuse is power, or rather a lack of? A male, spurred by the irrational ideals of asserting dominance and invulnerability due to toxic masculinity beliefs, when faced with a ‘no’ to a request of, for example, attention or for sexual gratification or even when subconsciously feeling that he is helpless or does not have the capability or skills to acquire what he desires, turns to abusive behaviour to acquire what he desires. This means they would attack, verbally, physically or sexually in order to overpower their target. Furthermore, spurred by lack of empathy and viewing the other gender as having a diminished status they often feel their actions are legitimised! These beliefs have ‘justified’ such actions in the minds of perpetrators and perpetuated these beliefs for generations.

I want to make this loud and clear, males have no excuse for this behaviour, we never had. We have the power of knowledge and we must act to change this culture of toxic masculinity. We need to empower all genders to stand up against abuse, against shaming, against this culture of ‘war’ between genders. Empowerment means to work together to help those who feel powerless and abused into finding their own healthy ways. We need to learn to co-exist and celebrate our differences and our sameness instead of trying to overpower each other. This is not a battle of the sexes nor about who dominates who. This is a challenge to create a better world where everyone can feel safer and more respected, where everyone has their chance to be equal.

Let us elevate this discussion to a level of compassion towards others and respect towards all and our common humanity. Because especially in these difficult times of collective trauma we need to stand as one.

World Health Day will be celebrated on the 7th of April – This year’s WHO/Europe campaign will promote messages and activities that showcase how individual choices and social behaviours impact our environment. WHO have compiled Read more… 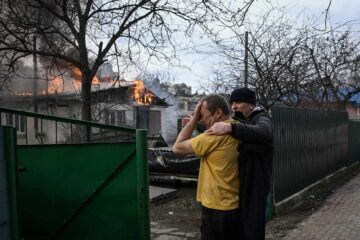 Malta Chamber of Psychologists’ Statement on the War in Ukraine

The Malta Chamber of Psychologists (MCP) expresses its concern regarding Russia’s military aggression against Ukraine which is having tragic consequences on many people and is a threat to everyone in Europe. The MCP expresses its Read more…

Helplines and Emergency Contact Details in case of Crises